For more than one hundred years the Ahmadiyya Muslim community has been leading a peaceful revival of Islam. From the time it was founded in India in 1889 it has enjoyed an unrivalled record for peace and for its efforts to build cohesive societies.

Established in the UK since 1913, we built London’s first mosque in 1926 (The London Mosque in Putney). We now have 129 branches across Britain and have opened a number of mosques including the landmark Baitul Futuh mosque in south London, which is the largest in western Europe.

The Community has now built over 15,000 mosques, over 500 schools and over 30 hospitals and has translated the Holy Qur’an in over 70 languages. It propagates the true teachings of Islam and the message of peace and tolerance through a 24-hour satellite television channel (MTA), the Internet (alislam.org) and print (Islam International Publications).

It has been at the forefront of disaster relief worldwide through an independent charitable organisation, Humanity First and also works on an international programme to provide clean water, medical assistance, sustainable energy and aid to those suﬀering across the world. 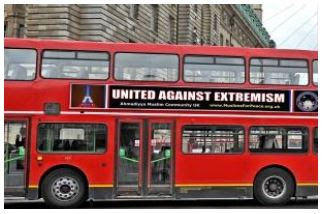 In the UK, every year it raises hundreds of thousands of pounds for numerous British charities such as the Royal British Legion, Save the Children, Macmillan Cancer, the Great Ormond Street Hospital to name a few. In the past year alone it has planted more than 30,000 trees, provided food for more than 10,000 homeless people and donated more than 1,000 units of blood.  Islam teaches members to be positive contributors to society as a whole and during the recent floods,hundreds of youth also volunteered hundreds of hours to assist in the aﬀected areas. The community has launched a national anti-extremism campaign.

One Community, One Leader

The community is led by a system of Khilafat or spiritual leadership. His Holiness Hazrat Mirza Masroor Ahmad is the community’s fifth Khalifah and is based in London. His Holiness leads his global community and inspires it to serve  humanity with the spirit of kindness and humility that is integral to Islam.

In accordance with the teachings of Islam he upholds the honour of all prophets of God and highlights the role of religion in the promotion of peace.  His Holiness has led a worldwide campaign to convey the peaceful message of Islam, through all forms of print and digital media.

Under his leadership, national branches of the Ahmadiyya Muslim Community have launched campaigns that reflect the true and peaceful teachings of Islam. Ahmadi Muslims the world over are engaged in grassroots efforts to distribute millions of ‘Peace’ leaflets to Muslims and non-Muslims alike, host interfaith and peace symposiums, and present exhibitions of The Holy Qur’an, to present its true and noble message. These campaigns have received worldwide media coverage and demonstrate that Islam champions peace, loyalty to one’s country of residence and service to humanity.

The Founder of the Ahmadiyya Muslim Community

The Ahmadiyya Muslim community was founded in 1889 by Hazrat Mirza Ghulam Ahmad (1835-1908) of Qadian, India. He claimed to be the expected reformer of the latter days and the awaited one of the world’s religions (the Messiah and Mahdi of the latter days). His mission was to revive the peaceful teachings of Islam and engender in people’s hearts the love of God and the duty to serve mankind.

The community is now established in more than 200 countries and it spearheads an international effort to promote education and health across the developing world as well as a global peace campaign to engender respect and human rights for all.

To find out more about the Ahmadiyya Muslim Community: www.LoveForAllHatredForNone.org